We support the free Ultras 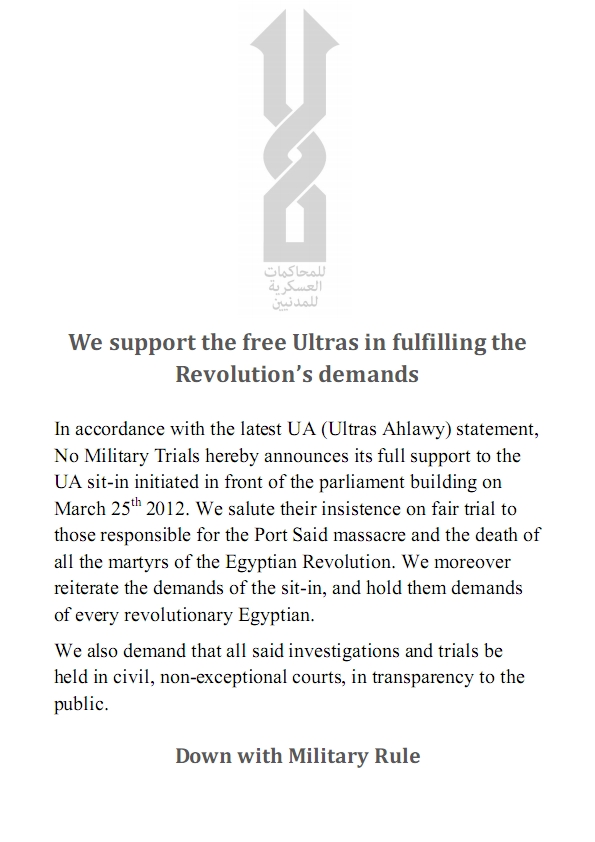 (New York) – Egypt’s military courts have investigated or tried at least 43 children over the past year, Human Rights Watch said today,including the pending trial of 13-year-old Ahmed Hamdy Abdel Aziz in connection with the Port Said football riots. Children prosecuted in military courts have not had access to lawyers, and often to their families, until after military authorities have investigated and sentenced them. Since coming to power in February 2011, the Supreme Council of the Armed Forces (SCAF) has referred over 12,000 civilians for prosecution by military courts before military judges, though these courts fail to meet minimum due process standards.

The Egyptian military should end all investigations and trials of children before military courts, Human Rights Watch said, and should release or transfer all those already convicted to the juvenile justice system.In particular, the military should immediately release Islam Harby, a 16-year-old boy who has served nearly a full year in an adult maximum-security prison after an unfair trial before a military court in March 2011, Human Rights Watch said.

“It’s bad enough that the SCAF is trying civilians in military courts, but to put Egyptian children through the military justice system is an even graver injustice,” said Priyanka Motaparthy, Middle East children’s rights researcher at Human Rights Watch. “The military has brought children before military courts without even the most basic protections, like access to lawyers or their families. Even worse, authorities have abused them in detention.”

Human Rights Watch and the Egyptian activist group No Military Trials for Civilians have documented 43 cases of juveniles taken before military prosecutors and judges in the past year. Some have remained in detention for up to a year, and at least six of the youths alleged that army or security officers had physically abused them. In addition to those investigated and prosecuted before military courts, children have also been prosecuted through Egypt’s adult criminal justice and state security courts, rather than before juvenile justice courts as required by Egyptian and international law.

The military should publicly release data on the cases of all civilians tried before military courts, including children, Human Rights Watch said.  Parliament should amend the Code of Military Justice to prohibit military tribunals from trying children under any circumstances. Among the cases reviewed by Human Rights Watch, a military court in April 2011 sentenced Mohammed Ehab, 17, to 15 years in Tora maximum-security prison, where he has remained for the past 11 months. Ehab was charged with breaking the military curfew and attacking security officers, his father told Human Rights Watch. Neither Ehab nor Harby have had lawyers until March 2012, their families said.

Mohammed Sherif, also 17, and a group of his friends were detained in July at a military checkpoint in Arish on the way to a wedding and accused of participating in an attack on a local police station, according to his father. Military officers took them to an army command post in Ismailia, where they were interrogated by military prosecution and detained for 15 days, then released, his father told Human Rights Watch. In a video interview taped by local human rights lawyers, Sherif said that during his detention, guards beat him, gave him electric shocks all over his body, and burned him with cigarettes.

Army police arrested Mohammed Abdel Hadi, 15, on March 9, 2011, as he was leaving a microbus station on the edge of Tahrir Square, his sister Hoda told Human Rights Watch. Adel Ramadan, a lawyer, told Human Rights Watch that he found a group of 16 children, including Abdel Hadi, when he visited the military prison in Hikestep on March 27, 2011. Ramadan said he interviewed three other children, ages 14, 15, and 16, who told him that military officers had beaten and subjected them to electric shocks in the prison. In March 2011, a military court sentenced Abdel Hadi to three years in prison, but released him two months later, his sister said.

Islam Harby was 15 years old on March 23, 2011, when military police arrested him on the street in the Moqattam neighborhood of Cairo, where he worked at a bakery to support his family, his mother told Human Rights Watch in February. Harby had spoken with Human Rights Watch in April 2011 using a mobile phone borrowed from another prisoner.

“There was a fight in the street, and the army thought that I and two others were thugs, so they arrested us and took me to a court,” he said. “I don’t know what my sentence is.”

Military officers accused Harby of robbery and possession of a knife, and took him to Cairo’s S28 military prison, his mother said. She said he was sentenced the same day.

Harby’s family had received no news of his whereabouts or charges against him until one week after his arrest, when they received a call from another detainee’s family informing them of their son’s whereabouts, they said. They were not able to visit him until late April, when he was transferred to the maximum security section of Tora Prison, in a suburb of Cairo, where he was held in a cell alongside adult prisoners.

His mother said that when she saw him in late April, his face showed signs of physical abuse, and one eye was swollen.

“His eyes had bruises and welts around them,” she said. “He looked like he was dead.”

He has remained in Tora for 10 months, alongside adult prisoners. His family says he receives inadequate food, with only two small meals a day, and inadequate medical treatment.

“He’s not eating enough and is very tired; he cries all the time [when we visit],” his sister Abeer told Human Rights Watch. “He has a kidney problem, but the prison doctor just gave him a painkiller. He needs proper medication. We tried to bring him his medication but [the prison guards] would not allow it.”

Harby’s mother added that she asked the military judiciary office in Salah Salem for a copy of the judgment against Islam and any documents relating to his case, but has yet to receive them.
“We only found out his sentence when we saw his name on the prison guard’s list for visits: next to his name it said seven years,” she said.

Article 37 of the convention states that, “Detention shall be used only as a measure of last resort and for the shortest appropriate period of time” for child prisoners, and “[e]very child deprived of liberty shall be separated from adults.” Article 37 also says, “Every child deprived of liberty shall be treated with humanity and respect for the inherent dignity of the human person, and in a manner which takes into account the needs of persons of his or her age.”

Article 112 of Egypt’s Child Law (Law No. 12 of 1996 Promulgating the Child Law, as amended by Law No. 126 of 2008) states that, “Children may not be detained, placed in custody, or imprisoned with adults in one place,” and that any public official who “detains, places in custody, or imprisons a child with one or more adults in one place” should be sentenced to a minimum of three months in jail and a fine of no less than 1000 Egyptian pounds (US$166).

The Egyptian Code of Military Justice in article 8 (bis) (1) allows military tribunals to try juveniles if they are accompanied by an adult who is subject to military jurisdiction, including military personnel or civilians in military zones.

“While some children have been released, others are still in jail based on the hasty findings of these secret trials,” Motaparthy said. “Authorities should be scrambling to fix these wrongs and trying to repair some of the damage to these kids’ lives.”

“At first they shoved us in front of them..lashing their whips to the ground, beating us with their bare hands while we ran sandwiched between two columns of soldiers who kept trampling us then beating us when we’were down.  Later, two tall men wearing sun glasses showed up..they kept electrocuting us for about half a minute at a time. We were about 100 or less. I was the youngest. I handed them my School ID”
This was a passage from the testimony of a 15 year old who got arrested on the 10th of Feb. in Ramsis sq. after the curfew was imposed.  He was set free on the 28th. This testimony was documented by the Nadeem Centre on March 1st 2011..a date up until which the boy could not locate his father.
Since it all started kids have not been spared the violations committed by the Military. Violations including cussing, beating, electrocution, sexual assault, Court Martialed as well as Emergency State Security trials for civilians. Every incident where a sit-in or a protest march have been forcefully dealt with, and every campaign of random detentions aimed at the revolutionaries, children younger than 18 years of age were among the victims.
Mostafa Gamal El-Deen : 15 years old 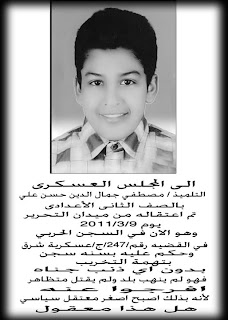 A Second year Prep. School student. Was arrested in Tahrir sq.
Was sentenced with one year imprisonment by a Court Martial to be spent in the Torah prison. He was later suddenly released in three weeks time.

Was arrested disembarking a public transport at Tahrir sq.
Was sentenced with three years by a Court Martial. Also Torah prison.
Following a two month campaign for his release, his sentence was commuted then suspended. He was released with the rest of the group arrested on the 21st of May, 2011 after spending two months in prison.

While disbanding a protest in front of the Israeli Embassy 150 protesters were arrested, 17 of which were minors (under the age of 18). They all were Court Martialed.
They were later released with a suspended sentence of one year in prison.

Israeli Embassy Events of the 9th of March, 2011

87 people were randomly rounded up on the 10th of March. Among which 8 were minors who were Court Mortadella then later released on the 1st of November with suspended sentences.
On the night of the protest (9th March) 38 people were arrested, 5 of which were minors including a 14 year old boy.  They were referred to an Emergency State Security Court to be later released. The case is still on going.

12 protestors were arrested. A 15 year old child by the name of Seif Sadek was among them.  He was later acquitted and released on the 13th of Nov.

Events of the 9th of October. 2011 (The Maspero Massacre)

28 people were arrested among which three were minors. They were questioned by the Military Prosecutor.  The minors were released on the 23rd of November.
The case was redirected to a civilian special prosecutor but is still on going.

Islam Ragab Harby : Born 1995
He was Court Martialed for aggravated robbery (Case #409 2011) and was sentenced to 7 years imprisonment (the same sentence enforced on Khaled Saeid’s murderers)
He is now spending time in the maximum security Torah prison awaiting final ratification of his sentence in order to appeal.
This constitutes the information available to us as to the minors who were subjected to Court Martialed.  The question remains : exactly how many children had to go through torture at the hands of the Military under the pretense of a “security void” or the Nation going through a “critical time” ?
How many of them are still in prison, after being Court Martialed, whom we don’t know anything of?
Posted by monasosh at 11:30 PM No comments: