This account was first published by Aalam Wassef on Facebook on January 6th
Citizen M.
This is an account of my encounter on December 31st with Egyptian blogger and activist Maikel Nabil, arrested by the Supreme Council of Armed forces for opinions he posted on his blog. Maikel is now serving a two years sentence and is enduring inhuman conditions of detention. Since his arrest Maikel has refused to recognize the Military Prosecutor’s ability to judge him.  Military trials for civilians have swept the Egyptian revolution with no less than 12,000 arrests since January 28th 2011.
El Marg Prison, 8.40 am. Waiting for Mark, Maikel Nabil's younger brother. Mark arrives carrying three heavy bags containing juices, milk, books, hundreds of sympathy messages, newspapers… An ornamented award certificate reads Istanbul, AHRLY, To Maikel Nabil for his firm commitment to freedom. I read again and stop at the word firm.
As we pass the prison’s porch, we’re immediately identified as Maikel people. Walky talkies start buzzing. Harrassment starts, routine bullying and unwritten administrative measures that Mark denounces vocally, one after the other, fearless.
Our bags and ourselves are searched and scanned, papers are confiscated. We board the traditional yellow wagon-bus that will take us to the visitor's hall. Right and left, all we can see are fields and animals. At the end of this unexpected green road, stands a white, blind, imposing wall, topped with barbed wire and, in the middle of all that whiteness, a small black door.
We watch officers banging at the door, going in, going out, at mothers, sisters and children waiting to be let in.
We wait as well. We give our IDs to Mrs Sabah. Mark knows everybody by their first names. I suddenly remember that he’s been coming here for 9 months and that, each time, he goes through the same bullying, and harassment. We wait ten more minutes and are let into the visitor's hall. Visits end at 12 and it's already 10.30. We wait, surrounded by informants who aren't really hiding from us. Mark asks the warden why Maikel hasn't come yet. Maikel's cell is 40 meters away and all other prisoners have come to their visitors. It's 11.
Maikel finally appears, carrying a plastic chair on which prisoners sit, maybe to be easily identified. I don't know. He comes to us. He can barely carry the light chair he finally puts down. I measure his exhaustion. It's the first time I ever meet him in person. Maikel is tall, pale, underweight, hunched, loosing his hair. His brother and I sit on the cold stone benches. Maikel brings his knees together and slips his hands in between to keep them warm. He's shaking cold. He says hello but is eager to start talking and working his way out of hell.
Mark says he has to leave in 30 minutes to sit for an exam. Time is tight. Maikel takes control of the conversation. I'm struck by the weakness of his body compared to the strength of his mind.
Mark fills him in with the latest news regarding the mobilization and march that was held for him on December 29th 2011. We see a shine in Maikel's tired eyes. Mark shows to his brother some photographs of the march, of the military violence footage youngsters projected on the walls of the Supreme Court of Justice, of this unforgettable charismatic woman wearing a niqab, carrying his picture all through out the march. We tell him about the UN Watch statement signed by 30 Human Rights organizations, about articles pouring in the international press, about Alaa Abdel Fattah who saluted him on ONTV, about students, mothers, fathers, friends, public figures and Egyptian activists who joined the march in solidarity. I give him a glimpse of Ahdaf Soueif marching in Tahrir, Lobna Darwish, Salma Said, Sultan Al Qassemi embracing his brother, Hossam el Hamalawy and Omar Robert Hamilton filming and taking snapshots, of the thousands of friendly posts in social networks, of Mona el Tahawy tweeting and retweeting at all times of day and night, of this amazing woman who, out the blue, sent us her entire press contact list… I tell him about Tamim Al Barghouti's stance about him and the many unhappy reactions he received.
Maikel addresses me for the first time. I like Tamim's poetry. Sometimes, he snaps.


Mark and I try to convince Maikel to end his strike. We tell him how much mentalities, awareness and commitment have  changed. He tells us how much he's in pain. Kidney pain. Maikel adresses me again, privately. I want to tell you something. For nine months, from prison, to hospital, to torture, to prison, I was let down by almost everybody. Opinions are opinions, human rights are human rights, military trials are military trials.
I ask him again to end his hunger strike. Maikel looks at the bags and asks. What did you bring, Mark? Mark responds. Maikel looks at us again. You have to  take me away from here. Submit a request today to the General Prosecutor for my immediate transfer to Torah Prison. It's rotten here, people are rotten, cells are rotten, water is rotten, sewage water floods in my cell everyday, I can't bathe. He looks at me and points with his chin at an informant almost glued to me, and at another one sitting in our back. Maikel interrupts the conversation. How are you Abu Alaa! How are you Abu Hemed! Both informants turn around. Their faces break into a corrupt cringe of a smile.
Maikel resumes. I would like Alaa Abdel Fattah to come and visit me. Tell him he might be able to come on January 7th. And Mona Seif from No Military Trials. Tell them I would like to see them. I tell him about a post by Mona Seif saluting him and Mark for their struggle and resilience. The more we speak to Maikel about support, sympathy and commitment, the more I see him sitting straighter and straighter.
Maikel looks at the bag filled with books and pulls them out one by one, quietly. Sitting there, half dead on a plastic chair in El Marg Prison, he looks at each book, with patience and care. You can take that one back, I’ve read it already.
Aalam Wassef
Cairo, January 6th 2011 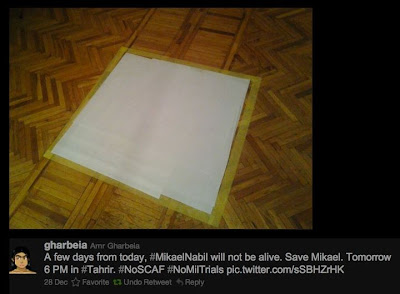