Maikel Nabil, 26, is the first Egyptian blogger to have accused the Egyptian army of using extreme violence against peaceful protesters.

On March 28th, 2011, Nabil was arrested after having published a blog post in Arabic entitled "The People and the Army have never been one hand". Images, videos and personal analysis offered a documented account exposing the military violence being used against peaceful protestors. He was arrested at his home and, although a civilian, presented before a military court.

On December 20th 2011, after 9 months of imprisonment and 125 days of hunger strike allowing milk, juices and medication only, Maikel Nabil was finally sentenced to two years by a military court. He was then immediately transferred from El Marg's Prison clinic to be placed in solitary confinement.

Already considerably weak and underweight, Nabil decided to extend and intensify his hunger strike and is now refusing all liquids, food and medication. and is now in his 9th day of that strike.

Nabil contests the military court's legitimacy, its verdict, being arrested for his writings and opinions, and being detained in inhumane conditions. Nabil also stands for the 12,000+ Egyptian citizens that are currently languishing in prison since January 28th 2011, after facing expedited military trials.

Without regard to his fragile physical condition, Nabil is now held in solitary confinement, in a tiny, garbage-filled prison cell without a bed. His general practitioner, cardiologist and parents have no access to him. His physical condition has entered a critical phase as vital organs are giving signs of failure (kidney and liver).

In his incriminated blog post, Nabil documented what many saw and witnessed, but feared to expose. Since December 17th 2011, the world has seen the hideous footage of a female protestor being stripped, beaten and stomped by soldiers, while others were being shot at with live ammunition. On that single day,12 died and over 500 were severely injured or tortured. On October 9th 2011, international networks also broadcast the Egyptian army's APCs running over and smashing protestors gathered around the Maspero State TV building, killing 24 and injuring hundreds. Endless hours of footage continue to document the ongoing inhumane crackdown of the Egyptian military on Egyptian citizens. For having exposed the truth, Nabil is enduring a sadistic agony.

Born in Assiut on October 1, 1985. Graduated as a veterinarian in 2009. Also a political activist, Maikel Nabil has a long history with the military institution as both a conscientious objector and founder of the No to Compulsory Military Service movement. His engagement against compulsory service caused his repeated arrest and brief detention in November 2010. On his blog, Maikel Nabil describes himself as a liberal, secular, capitalist, feminist, pro-western, pro-Israel, atheist, materialist, realist, pro-globalist, intactivist (sic), anti-militarist and pacifist. 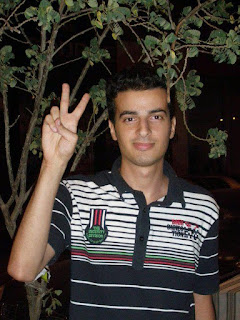 Although of Coptic Christian descent, Maikel Nabil is vocal about his atheism, in a country where religious conservatism is on the rise and sectarianism against the Coptic community has become violent. His public support for peaceful relations with Israeli people made many Egyptians fail to support his campaign for release and free speech within Egypt. For the average man on the street, Maikel Nabil falls perfectly into the Egyptian military's narrative vis-à-vis Egyptian revolutionaries "sponsored by foreign elements". In State controlled media, he is addressed as "an anti-nationalist, christian-atheist, pro-Israeli element". Nabil is being judged on two levels, by both the military and a conservative society, for his atheism, his perspective on Israel, his openness to gay rights, his support for freedom of speech and, primarily, for exposing military crimes.