Today, Alaa Abd El Fattah appeared for the first time in front of a civilian judge. His lawyers had loged an appeal for him to be released from custody, pending the trial of those accused of violence at Maspero on October 9th. The appeal was rejected and Alaa was returned to Tora Maximum Security Prison. 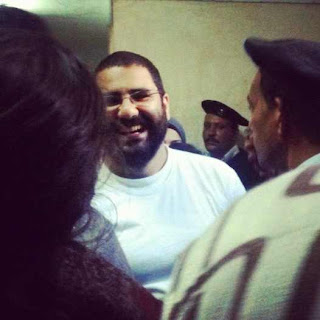 Field Marshal Tantawi announced on Friday 25th that the Maspero case file was being transferred from the Miliary Prosecutor to State Security. This was designed as a concession on the day that saw Tahrir full of people chanting for the downfall of the regime.

It was with great disappointment and frustration, then, that today's civilian judge has chosen to continue Alaa's detention, rather than allowing him to be present at the birth of his first child, Khalid, who is due on Wednesday.

This video should serve as a reminder of who should really be facing investigation for the killing of 28 unarmed protestors on October 9th.