Why Occupy in Solidarity?

This piece was originally published on immodestwitness.


Following their letter of solidarity to Occupy protesters, Egyptian activists have called for an international show of support in return for tomorrow (Saturday) in order to defend the gains of this winter’s revolution from being lost to military co-option. I’ve been helping to plan a screening of short films taken by activists and filmmakers in Egypt following the march, modeled after the cinema that was set up in Tahrir Square this summer to do the same. I also posted the flyer for tomorrow’s rally on my Facebook page; it looks like this: 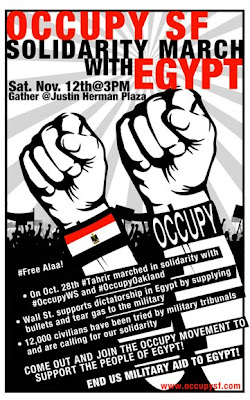 In response, a friend posted the following response: “How does wall st (financial firms and banks) have anything to do with directly supplying bullets and tear gas to anyone? If Wall St shut down would that solve the Egyptian problem? These two issues seem completely separate to me.”
I think this question is more easily asked than answered, in large part because I think that the process is deliberately concealed by its own complexity. This, as in all politics. But I think it’s an important question to ask for a number of reasons and that there are ways in which the connection may not be so tenuous after all. So here are some brief thoughts.
There’s a double-edged sword to the rhetoric of international solidarity: broadly speaking, economic inequality, police brutality, and structural unfreedom are shared underlying determinants in the wave of uprisings and revolutions we’ve been seeing in even just the past year, though nations within the Global South have long understood the interdependence of their claims to postcolonial independence. The extent to which we recognize our shared struggle, then, creates it as such. And given how interlinked the world is under the grip of a centrally-controlled but globally-diffuse system of financialized capital, this is uniquely true of the present moment, and uniquely interlinked with the Global North (as that category shrinks to approximate what Occupy protesters are calling the 1%). That said, recognition through acknowledgement is not enough. People on the left give solidarity a lot of lip service, but the effect is often negligible in the realm of action, or even detrimental to the local voice of endogenous movements.
With that said, let me address why I think these particular issues — Wall Street’s corruption and military repression in Egypt — are specifically related. The Egyptian revolution was not a giant display of anti-Americanism, but a struggle to end Mubarak’s dictatorship and restore political sanity and basic economic parity to a crippled country. However, Wall Wall Street was present because Wall Street has become the center of corrosion of the American economy and the corruption of American politics, which have direct and quite massive effects on Egypt and countries like it. Some examples:
So WashingtonsBlog is right to say that “Vice President Biden’s attempt to defend President Mubarak by saying he’s ‘not a dictator‘ is like Nixon saying ‘I am not a crook.’” From that site:

Posted by Omar Robert Hamilton at 3:56 AM